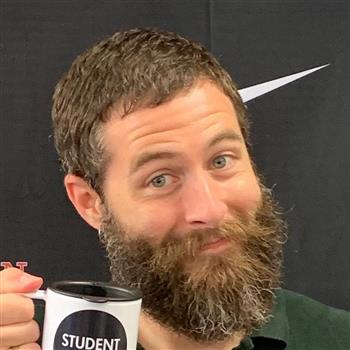 Constantly torn between longing for the mountains and wishing to have his feet in the water, Evan Carter is quite happy to be living in Huntsville, AL, a nice halfway point between the two.  A childhood in the Florida Keys led to culture shock in Alabama, where he met an interesting array of people who quickly became good friends.  He loves playing music, but his passion for that is not matched with a corresponding talent, so he had to hatch a plan to be able to provide for his wonderful wife and (eventually) his bizarre and loveable son.  It seems he liked school enough to spend several more years in school in order to be qualified to remain in school, and apparently a Master's Degree from Montevallo, a bit of good fortune, and a can-do attitude were enough to spur an interest in the decision-makers to hire him here (although he's pretty sure that he was rather nervous at his first job interview).  After being here for a double-digits amount of years, he likes to think that he has since grown better at his career (and at being a generally acceptable guy), and he is thankful to be teaching, instead of doing the myriad of other sketchy jobs he held prior to this.  He enjoys interesting hairdos, music that tells a story, sonder, hammocks, and theological discussions.  When asked what he teaches, he’ll likely reply that he teaches students... but that what he happens to teach them is hopefully how to communicate well.  This response often prompts interesting dialogue, but sometimes it just results in a confused look.  Such is life.