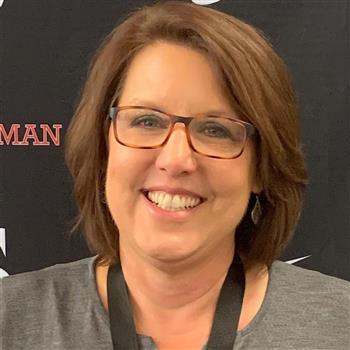 Kim Goins was born in Tuscaloosa, Alabama. (ROLL TIDE!!!). She graduated from the University of Alabama in Huntsville in 1990 with a Bachelor of Science in Nursing. She worked for Huntsville Hospital in the Neonatal Intensive Care Unit for 7.5 years. She then worked in a local pediatricians office for 2 years. She began teaching Health Science in 1999 at the Madison County Career Academy. In 2006, she and Mrs. Holland moved to Sparkman High School and created the Medical Academy. She is currently taking classes at the University of South Alabama pursuing her Nurse Practitioner license.

She has been married to Ray for 30 years and they have 2 children. Kyler and Kaitlin. They have both graduated from the University of Alabama and are working. She is excited about becoming a grandmother in October!

She has 2 pets. Chipper a Shih Tzu/ Bishon mix and Bitty, a cat.

She is an AVID University of Alabama Football fan and enjoys cooking and reading.